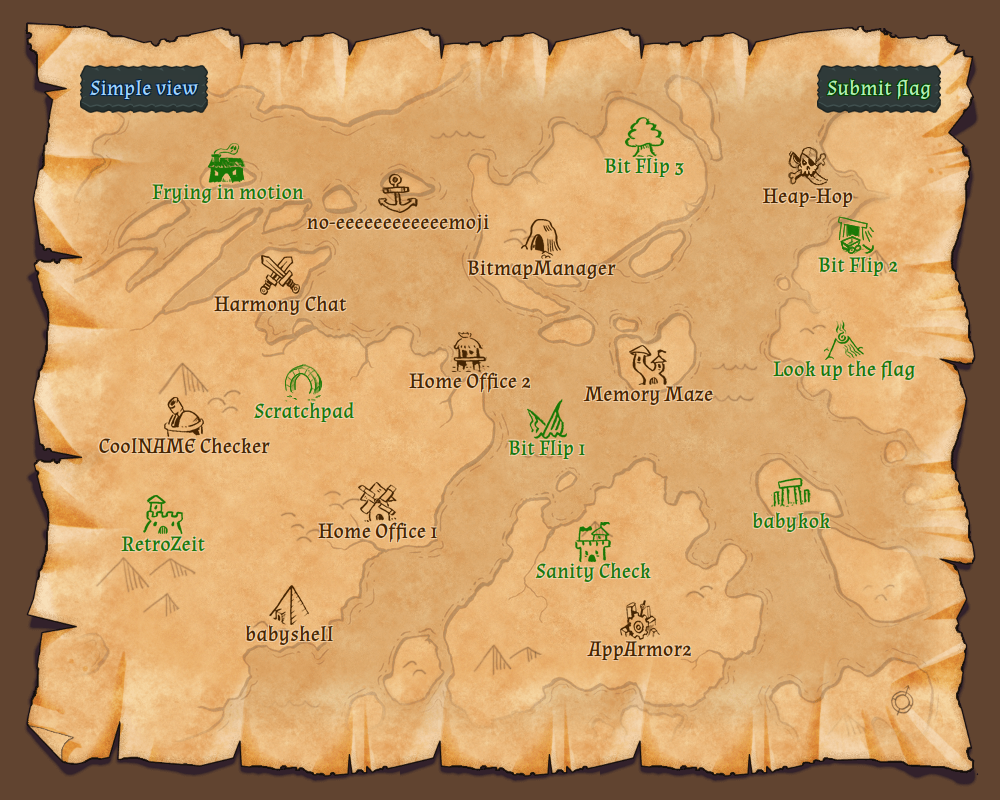 Dragon CTF 2020 is definitely had my best CTF moments. There are big brain moments and I have been mind-blown for multiple times during the game. This time we have teamed up with @blackb6a. I have solved all the crypto challenges and two challenges with my teammates.

For each oracle call, the following will be printed

Of course, the devil is in the detail. The AES-CBC key is derived as follows:

Furthermore, the PRNG is simple. It is maintaining a 256-bit state $s$. 512-bit and 64-bit numbers are generated respectively with:

This is the setting for part one. Parts two and three are pretty similar though.

Part I: The real bit-flipping⌗

Bit Flip 1 was solved in about 45 minutes. Basically we are able to recover $v$ from the number of rng.getbits(512) calls. Since I am sure that there will be writeups on this part available online, I am skipping this part.

I am just going to admit that I am lazy.

Part II: A nightmare on long_to_bytes⌗

Bit Flip 3 was solved in 1 hour - and we were the first to solve. But wait, why isn't part II on Bit Flip 2? The reason is simply because just I cannot solve it (yet).

The prime used for Diffie-Hellman can be 513-bit long. This makes the AES key derivation interesting - as long_to_bytes(x, 16) actually prepend null bytes until the output size is a multiple of 16. For example:

Bit Flip 2 was solved in about 12 hours. I was mind-blown when I know da wae. Since the DH key could never be 513 bits long anymore, we can no longer exploit in the way as described in Bit Flip 3.

Basically we have three options:

There is a point of time that over 10 teams have solved Bit Flip 2 while only hxp and us have solved Bit Flip 3. If option 3 is the way to go, the number of solves would not be the same. Moreover, option 2 is barely possible in a perspective of math. That said, unless there is a vulnerability that I am not awared of, we may need to make $a = 0$. That is equivalent to rng.getbits(64) == 0 and thus a 64-bit proof-of-work. Possible?

The above hash ends with 8 null bytes. If the below seed generates a prime in its first call of rng.getbits(512), then a = 0:

Unfortunately it is not. Luckily there are many inputs (available on the Bitcoin network) that generates eight trailing null bytes as its hash. We can simply look at the blocks and find the one we need. For me, I was using the block API from blockcypher.com to retrieve and compute the preimage of hashes. Eventually block 657972 satisfies our needs and the Alice's secret key will be $a = 0$.

More importantly, the challenge server has a timeout of 20 seconds. Hence, you have to compute from the strfry-ed response in 15 seconds.

Part I: The first encounter⌗

"WTF. Yet another strfry question? It must be very boring." ~ Mystiz

This is the first comment I made to the challenge. It is actually much interesting than I thought and I have spent a good 5 hours for the challenge.

The previous CTFs (for example, challenge from ångstromCTF 2020 and DawgCTF 2020) exploited on the small seed space that can be exhausted. In the previous versions of libc, the seeds for strfry is given by time(NULL) ^ getpid(). I was trying to print time(NULL) and getpid() alongside with the strfry result, but the seed does not check out. What? Maybe the world is not peaceful anymore in libc 2.31-0ubuntu9. Let's download the source code and have a read.

Let's verify the first point - is the implementation for strfry changed?

Although the string is fried in the same way, the seed is changed! Since the seed is 32 bits long, maybe I can just exhaust it. However it takes 5 seconds to strfry a 257-byte long string for 0x140000 times, it is not feasible to brute force with the challenge implementation. Let's read how random numbers are generated.

Fast-forwarding the PRNG is easy. This is similar on the Team Trees challenge in CONFidence CTF this year. We can skip states with the matrix implementation (and I am able to skip the details for this part, too). After all, 5M seeds can be checked per second. Since we have only 15 seconds to recover the seed, we are unable to find the entire search space (only 1.75% of the seed space is checked). In average, we can recover the seed from the strfry output in 15 seconds once every 60 times. Finally, if we are able to recover the seed, we can freely fry and unfry strings.

We simply have to solve some theorems using Coq.

Good thing I have written some lean before, so learning / writing Coq isn't that difficult.

For the first part we have to solve the following 6 theorems in some random order.

I'd like to thank my teammate @02E774 for finding this powerful coq tactic intuition, and @harrier_lcc for showing us his coq and how to use it.

This would’ve taken a lot longer if we didn’t watch him livestreaming playing around with his coq. His coq is very very nah that’s it I’m done with the jokes.

We actually have to do some work with the remaining 3 starter problems:

The general idea for all of these proofs is to apply induction to split the proof into smaller, simple cases.

We have to deal with natural numbers for the final starter problem, which we can also solve using induction:

There are only 2 more problems after the starter 6.

The idea with this one is simply to expand both sides, and let the theorem prover see that both sides have the same terms.

The final question took us a while:

The idea for this is induction on both n and l. It should be easy for the base cases of n is 0, or l is nil, and induction completes the rest of the proof.

Finally we have the flag: