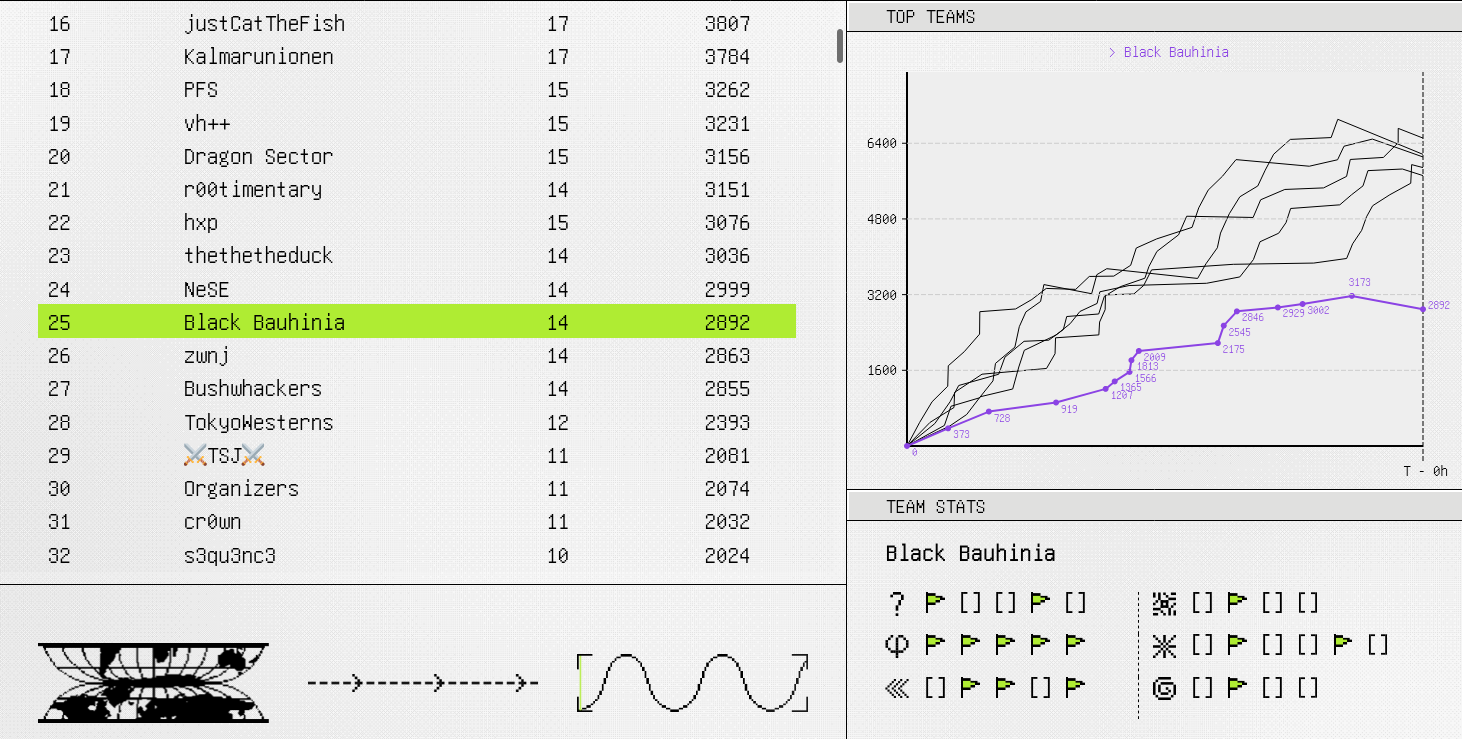 Crypto is not real hacking, they say.

Alice and Bob have a private key $d_A, d_B$ respectively and they are used for both ECDSA and ECDH. They derive a shared secret for encryption with ECDH and sign with ECDSA-SHA512.

We are given four messages those are sent between Alice and Bob (two from Alice and two from Bob). Denote the $i$-th message, ciphertext and signature being respectively $m_i$, $c_i$ and $(r_i, s_i)$ - Hereby $m_1$ and $m_3$ are signed by Alice and the rest are signed by Bob. We are given all of them except $m_3$. The objective is to recover $m_3$ where the flag is hidden.

Notably, the entropy for the RNG while generating ECDSA nonces is 128 bits long.

Let's look at the source code snippets those generate the nonce.

Since we have two messages those are signed by Bob, it is more reasonable to find his secret key, $d$. The following are a pair of congruences those satisfied:

We can combine the two congruences by multipling the first congruence with $r_4$ and the second with $r_2$. In that way we can eliminate one unknown $d$:

Regarding to the flag, that is definitely a no and I recalled ERC-1756 for Ethereum (which is luckily not standardized).

Yet another oracle, but the queries are costly and limited so be frugal with them.

A nine-letter password is split into three parts. Three keys are derived from each part of the passwords (namely $k_0, k_1, k_2$). We are given the below operations:

The goal is to read the flag within 150 calls.

Part II: How is the math useful?⌗

It is pretty evident that we need around 8.8K calls if we eliminate the keys one by one. That said, we should be able to eliminate many keys at once... But how?

Unfortunately, it is infeasible to play with binary search since the first step would make $k = 26^3/2$ and the complexity for solving system of linear equations is more or less $\mathcal{O}(k^3)$ - which would simply take forever.

Since we have 150 oracle calls in total and it should be generally broken down into the following procedure:

We need to recover $k_i$ within 49 oracle calls. In our case, we decided to employ a probabilistic approach solving the challenge.

Note that there is a ~40% chance such that the first round would fail. That is why the approach is probabilistic.

Part III: Crowdsourcing for the Flag⌗

Eventually, @hoifanrd was so lucky that he got the flag before @harrier_lcc is able to get a single byte of the password (in any of his six instances).

Please, tell me a beautiful story.

When connected to the server, we are asked to send a message $m_1$ and $\text{CRC}(m_1)$ will be returned (We do not have the source code for the CRC). The server then sends a target $c_2$. The objective is to send $m_2$ such that

It is evident that the content of $m_1$ does not matter, as long as it passes the hidden condition they impose (If the condition does not hold, it returns Your story is too short. Bye!), which I bet it is something related to the length. In our case, sending 1000 b's suffices.

In this challenge, you establish a secure channel with the server. Good luck!

When connected to the server, it sends a ServerHello message that includes the server's public key for ECDH (on the curve P-224), as well as the flag encrypted with server's ECDH private key. We will be replying a ClientHello message that the point should be either on P-224 or P-256. We will be sending SessionMessages which is a encrypted and HMACed payload when a secure channel is established. If the HMAC is correct and the content can be correctly decrypted, the server will be responding with another SessionMessage with a slightly changed IV. The objective is to decrypt the flag.

Note that the server's key does not change upon reconnect.

Since I am developing with Golang and gRPC at work, I did not spend a lot of time understanding the source code. The thing that struggled me the most is the challenge itself... Well, it was pretty evident that we are going to pick the points on P-256 and cast an invalid curve attack on P-224. However, we should pick invalid points $A$ with $A \in \mathcal{P}_{256}$ such that $qA = O$ for a small $q$. This seems difficult - and it really is!

Part II: Invalid curve attack, but what is that?⌗

For elliptic curve Diffie-Hellman key exchange, the opposite party computes a shared secret $S$ with the formula $S := \beta A$, where $A$ is our public key and $b$ is their private key.

Part III: Pulling off the attack⌗

In the challenge, the server is multiplying their secret key $\alpha$ to the point we gave ($A$ in our case) and its $x$-coordinate becomes the shared secret. This is a little bit different from what we had on part II. Look at the following fact:

If we have $n$ pairs of $(k_i, q_i)$'s, we are able to compute the possible values of $\alpha$ using Chinese remainder theorem. It is also important to not find small $q_i$s as the number of candidates is growing exponentially in terms of $n$.

By generating such invalid curves and computing the candidates of $\alpha$, we can eventually find the correct private key and hence the flag of the challenge: CTF{ChocolateDoesNotAskSillyQuestionsChocolateUnderstands}.

In this challenge, you have access to a signing oracle. Good luck!

This is yet another ECDSA challenge in the CTF. Let's recall a condition that made the signature valid, given that $z$ is derived by the message digest, $d$ is the private key, $(r, s)$ is the signature and $k$ is a random nonce generated when signing:

Let's formulate the whole question mathematically. Here are the steps:

With the idea implemented, we have the flag: CTF{TheySayTheEmptyCanRattlesTheMost}.